It’s six months since Ford partnered with Bug Labs to build OpenXC and now the system is ready for third-party developers to get involved. Rather than following Renault and others down the Android route, OpenXC is a dedicated platform designed to bring together third-party apps and hardware. It comes with an Arduino-based interface module that hooks up to the car’s own systems, allowing the software to work with sensors, audio interfaces, safety devices and whatever other add-ons an owner might want to rig up. One app, developed by India’s HCL Technologies, is already complete: it sends location updates to selected contacts to warn them if a driver is running late for a meeting. (Finally, Arduino gets to do something useful.) 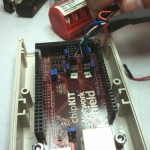 By |February 18th, 2012|Playground|Comments Off on Ford sends out OpenXC beta, vehicle-aware apps should be just around the corner