After our first Kickstarter campaign was over, we have been keeping up pushing the project Freematics forward, though the goal of the campaign wasn’t reached. The sample of Freematics OBD-II Adapter V2 is now under testing. The V2 has several changes and improvements. The most important one is the GPS support. One serial UART of STM32 was led out to 4 pins for connecting GPS module. The STM32 processor will process the NMEA data input from the connected GPS module and parse it. We have extended ELM327 AT command-set to provide access to the parsed data. The added commands are:

The second change is that the main controller has been replaced by ATMega328P. This change was made in consideration of several factors. ATMega644PA is large in size and has too much more hardware resources than is normally needed in most applications. ATMega328P has much smaller footprint so we can have more space on the board for other stuff. It also has lower power consumption. Switching to ATMega328P brings an additional advantage of the compatibility with standard Arduino UNO, so no Arduino IDE addon package is needed any more.

Please note that order of ICSP/SPI pins have been changed. Please be aware when connecting to USBasp programmer. 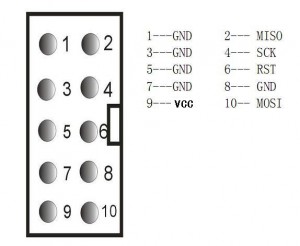 Another noticeable change is that we will open up two slots on the enclosure so that ICSP/SPI pins can be connected and microSD card can be plugged in and out without opening the enclosure. 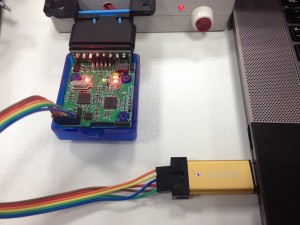 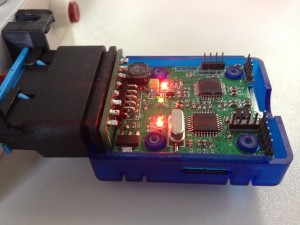